Case Study - Container deposit recycling at Splendour in the Grass

In 2010, Splendour in the Grass, one of Australia’s most loved contemporary music and arts festival, decided to take its environmental practices to a whole new level by running a container deposit recycling scheme at the event.

Splendour is a truly huge festival. It runs over 3 days, featuring some 80 plus international and local performers and entertaining some 27,500 punters.

The organisers wanted to provide a recycling system which would tackle solid waste streams that invariably end up across the venue if not managed sustainably (i.e. plastic bottles and aluminium cans). Such a program needed to satisfy obvious environmental goals as well as to improve the amenity of the festival grounds. And they wanted to do it in a way that would bring their audience with them, involving them more deeply in a process about caring for the environment.

Their great success is now a model for other big festivals to follow.

The three key challenges for Splendour in making this scheme work were setting up the practical infrastructure to make it happen, staffing the program, and making sure punters got involved to actually recycle.

Infrastructure is vital. If people pay a refundable deposit on every drink they buy and then find they can’t get it returned because there were not enough recycling stations for example, the program will not only fail, but will have a negative impact, putting people off recycling.

For a festival the size of Splendour, this meant setting up 4 large recycling centres directly adjacent to at least two of the bars, each with 6-8 lanes for people to queue at. At each queue was a staff member who had a basket where patrons counted their containers into and which was regularly emptied into large cages behind the centre. A dedicated cashier provided the patron with the corresponding number of drink tickets which could be redeemed for drinks or cash. At busy times each centre was capturing in excess of 400 containers a minute.

The cages were supplied by the recycling company, Veolia, as part of a special deal where a certain percentage of the containers went to pay for the delivery of the cages with the balance going to the festival to help offset staff and other operating costs associated with the scheme. This negotiation process, they found, was a crucial part of making the program both technically and financially viable, in particular taking advantage of the market price for recyclable aluminum.

Staffing is a critical part of the success of the program. Volunteers need to be mobilised to ensure the recycling centres are adequately staffed to keep queues running smoothly. Splendour recommends partnering with an NGO to supply volunteers, in exchange for free tickets, for example. Cashiers and some level of security are also required at the recycling centres, although these can double up where the centres are adjacent to the bars. 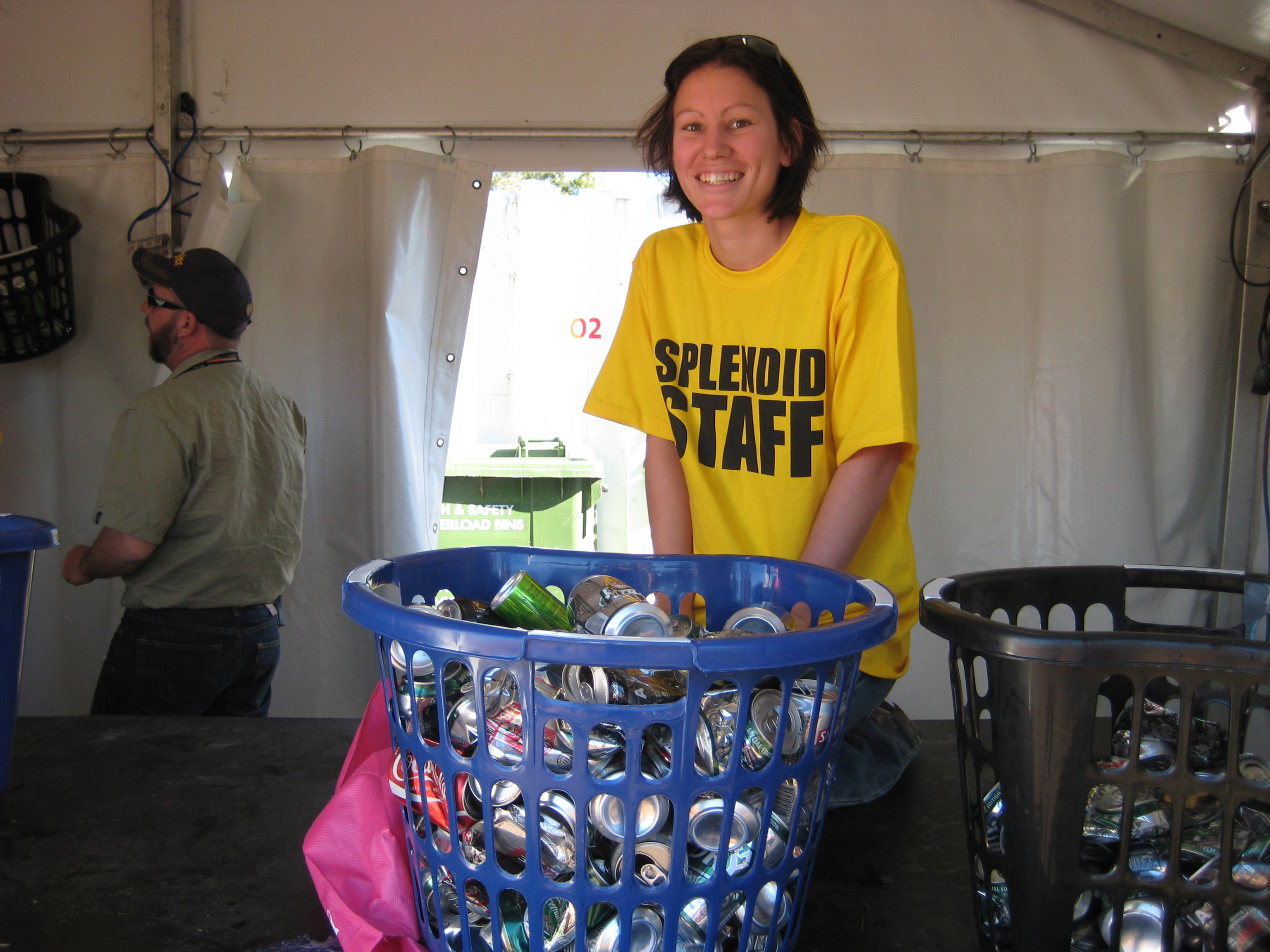 Site volunteers, encouraging people to think of the environment and recycle, are also a useful part of the picture. Programs such as Splendour’s Eco Cops who dress up in mock police outfits and spread the good word about the recycling program played a big part in encouraging punters to get on board. Splendour's Eco Cops have been a great success.

The Eco Cops were only part of the picture of encouraging participation. Promotion of the scheme went across the site, particularly through signage around the entry and the bars themselves. In addition, the program was promoted through the website, the program, at point of ticket sale and even on large digital screens at the sides of stages. In other words, the festival made it a core part of its identity. And that made it possible to succeed. 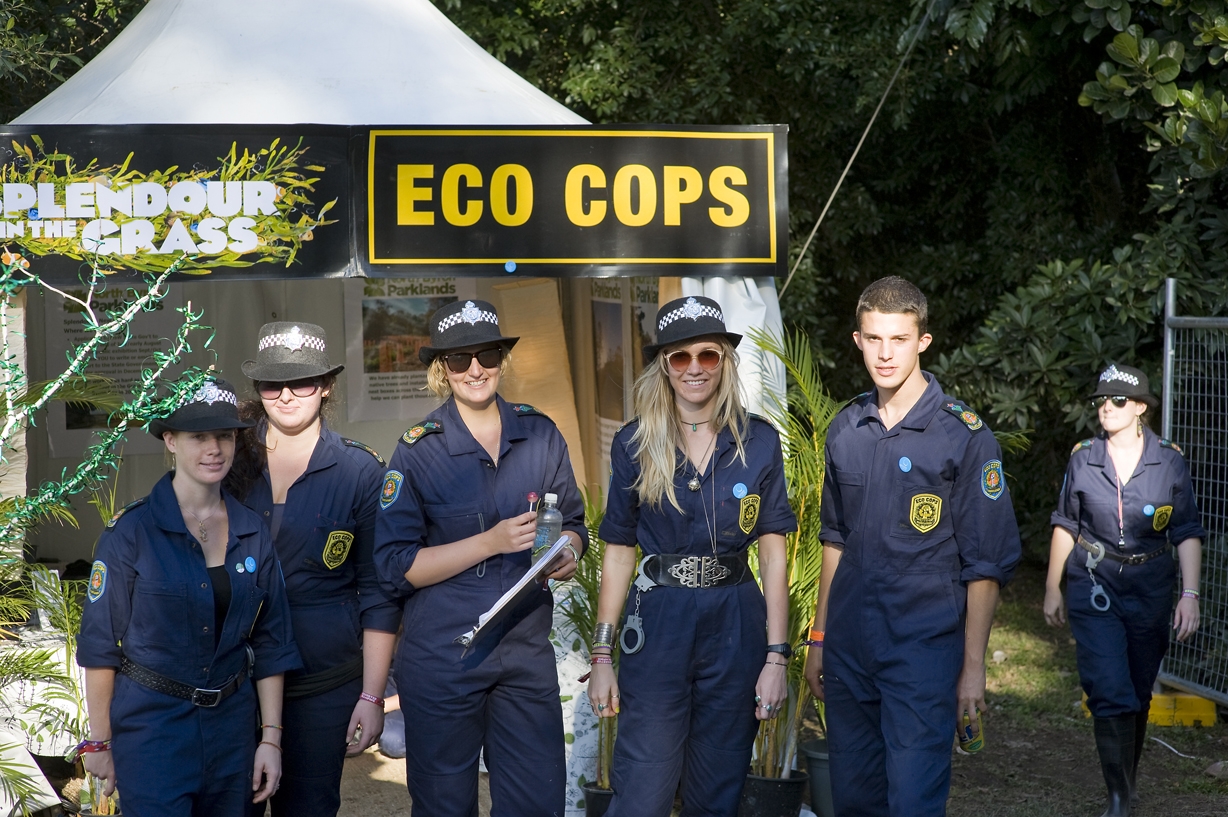 Feedback from punters has been overwhelmingly positive, leading to the program being run for several years and spreading to other festivals. Queues for the recycling centres, filled with a positive atmosphere, demonstrate the success better than anything else.

The repeats over following years also shows that the program is totally financially viable, paying for itself through the small number of uncollected deposits and the market value of the recyclables.

Most important of all is the tremendous recycling rate achieved. In the first year, Splendour captured 257,500 drink containers for recycling over the three days, accounting for over 92% of all drink containers sold. bringing great benefits to the environment and the quality of the festival.

The organiser of the program, Mat Morris, says:

Previously, people who had sat down and had a meal, generally speaking, when the site was deteriorating, would just get up and leave their waste where it was. What was happening when this program was in place was that they felt... a responsibility to maintain what they saw around them. There was this communal level of pride that took place. Secondly, the people who were taking part were excited about the program. It generated a lot of talk, a lot of friendly banter and competition.

Along with the "natural high" of the music festival atmosphere, Morris believes that participation in the program "almost stamps something in their brain… that will probably help to influence their decision-making process well into the future."

Green Music Australia thanks Splendour in the Grass, especially North Byron Parklands' Mat Morris, for the information and images, and, of course, for their tremendous leadership on this issue.