Ash Grunwald is one of several artists not only embracing reusable bottles for themselves, but making them part of their merchandise, encouraging their fans to use them too! 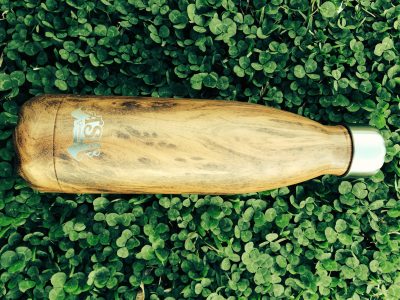 Ash Grunwald wanted to make a merchandise product that not only didn't harm the environment but actually helped it.

After years of seeing music festival sites littered with disposable water bottles, it was on a trip to Bali and seeing the direct impact of plastic bottles on the sea that the idea came.

Ash had carried his own reusable bottle for years. Why not make a beautiful reusable bottle that his fans could buy, to reduce their own impact on the environment while showing their appreciation for his music?

"We are all becoming more health concious and realise the importance of water for out bodies.  The fact that we are drastically altering out planet through purchasing a 'one use' plastic bottle often goes unnoticed." Dani Carr

Dani Carr, Ash's partner and manager, went about finding the best product she could source. They wanted something that was beautiful, top quality and affordable. It wasn't easy to find the double insulated, vacuum-sealed bottles at a reasonable price, but they found them in the end.

Ash and Danni were suprised - and very pleased - to find that the bottles didn't take much promotion to Ash's fans. All they did was put them up on his Bandcamp page and promote them through Facebook and "they sold like hotcakes".

"This is the first business I've been involved in where the product sells itself," Danni says. Ash carries one on stage, around town, at festivals, and finds people very often ask about it.

Part of the attraction is the look, part is the fact that they insulate brilliantly, keeping water cool on hot days, and part is in the environmental message that they send.

Not only is Ash now onto his third shipment, but Danni has already made bottles for other artists, including the Living End, and is now promoting them to other artists at http://earthbottles.com.au/.

Thanks to Ash Grunwald and Danni Carr for the information and their leadership.